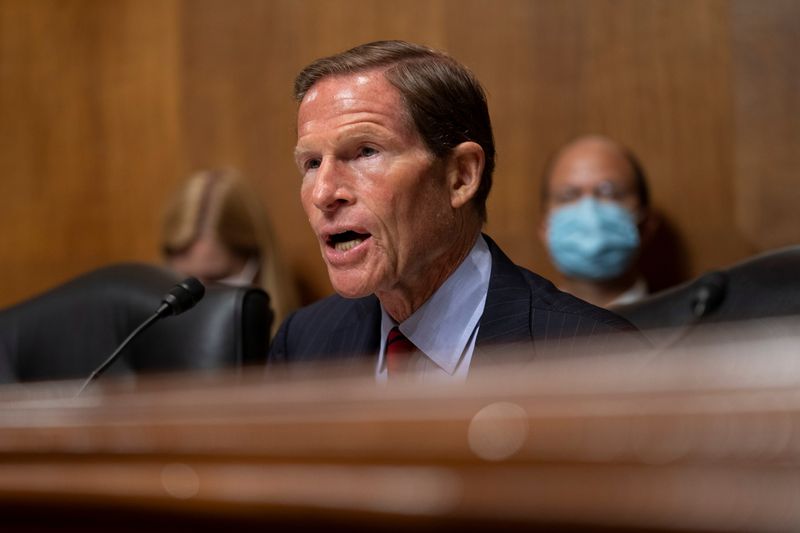 © Reuters. FILE PHOTO: U.S. Senator Richard Blumenthal (D-CT) asks questions to witnesses as they testify before the Judiciary Subcommittee on Competition Policy, Antitrust, and Consumer Rights in a hearing to examine big data, focusing on implications for competiti

WASHINGTON (Reuters) – Two Democratic senators called Wednesday for two bills to be voted into law that will limit what children are shown online and how their data can be used for advertising by Big Tech companies like Google (NASDAQ:)’s YouTube and Facebook (NASDAQ:).

Senators Richard Blumenthal and Ed Markey, both Democrats, called for the passage of an update of the 1998 Children’s Online Privacy Protection Act (COPPA), which would, among other things, raise the age of children whose data cannot be collected without consent from 12 to 15.

They also urged the passage of legislation that would ban auto-play settings and push alerts designed to pull users onto an app and then keep them there.

“Whether your name is Facebook, YouTube, TikTok or Snapchat, these platforms all seem to operate on the same computer code of misconduct, endangering kids and teens,” said Markey. “Big Tech has lost trust.”

Blumenthal called for the measures to be passed within months.

The lawmakers have expressed concern about children and teenagers being shown content that they say sometimes encourages dangerous behavior, eating disorders or other kinds of self-harm.

Markey was the House author of the 1998 Children’s Online Privacy Protection Act (COPPA).

In a hearing Tuesday, executives for TikTok, Snapchat and YouTube said that they sought to create fun, safe online experiences for kids and to exclude dangerous or unsavory content.

Disclaimer: Fusion Media would like to remind you that the data contained in this website is not necessarily real-time nor accurate. All CFDs (stocks, indexes, futures) and Forex prices are not provided by exchanges but rather by market makers, and so prices may not be accurate and may differ from the actual market price, meaning prices are indicative and not appropriate for trading purposes. Therefore Fusion Media doesn`t bear any responsibility for any trading losses you might incur as a result of using this data.

Fusion Media or anyone involved with Fusion Media will not accept any liability for loss or damage as a result of reliance on the information including data, quotes, charts and buy/sell signals contained within this website. Please be fully informed regarding the risks and costs associated with trading the financial markets, it is one of the riskiest investment forms possible.